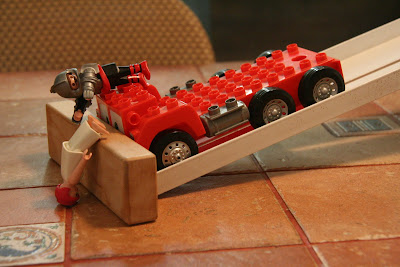 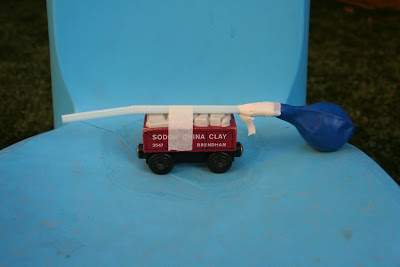 This week we continued our studies of motion through 2 mini-experiments.  The first one was an investigation of how increasing the slope of a ramp affects a car's speed. We used the same set-up from last week, (toy cars, tracks, and encyclopedias), but for the grand finale we threw in some action figures, blocks at the bottom of the ramp to simulate a CRASH, and some optional string for seat belts.  The kids observed the motion of passengers, with and without seat belts, as the cars crashed into barriers,

In the second experiment the kids were challenged to build an air-powered car using a toy car, a straw, a balloon, and some tape.  Both experiments demonstrated Newton's Laws of Motion.  More on than next week.
Posted by Rebecca Perlin at 5:44 PM No comments: 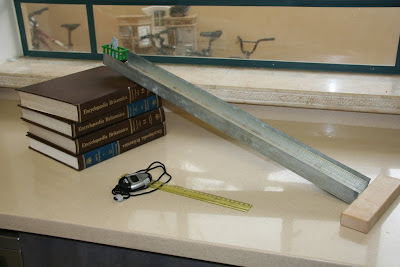 It's just amazing what you can learn using the Encyclopedia Britannica. In fact if you stack 4 or 5 of them, you can build a pretty cool ramp, great for exploring the concepts of motion. Get a couple toy cars and you're ready to roll! Measure the length of the track, how long it takes each car to reach the bottom, and you've got everything you need to calculate their speed.
Posted by Rebecca Perlin at 10:35 AM No comments:

Biology: "Newly discovered planet may have water on its surface" ....so what? 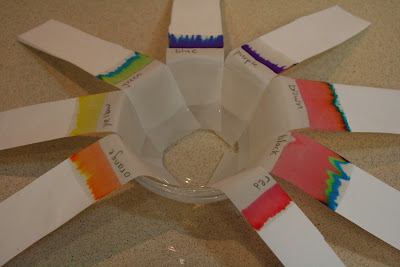 Just about a year ago a team of astronomers announced the discovery of an extrasolar planet, called Gliese 581g*. What's neat about Gliese 581g is that it may have liquid water on its surface.  When scientists search for water in space, they're looking for just one thing: life.

What makes water so special, and why do we think it's essential for life? These were some of the questions we set out to explore on day 1 of Biology. We started off by observing water's amazing ability to dissolve other substances. The kids prepared strips of filter paper, each one with a different marker color. After placing them in a bowl of water, we watched as the water traveled up the papers and dissolved the inks, revealing surprising bands of different colors.

We talked a bit about the chemical structure of water and how this structure allows water to dissolve substances easily and in doing so helps along the important chemical reactions necessary to sustain life.


*http://en.wikipedia.org/wiki/Gliese_Catalogue_of_Nearby_Stars
Posted by Rebecca Perlin at 12:00 AM No comments: