Biology: DNA, the Code for Life

This week in Biology we covered A LOT of ground...Phonecian alphabet, pictograms, merits of letter-based writing systems, DNA as code, protein synthesis, and we still hand time for a quick round of Biology Hang-man.

After a quick review of the nuts and bolts of how DNA codes for proteins, the kids did a simulation activity in which they decoded 6 genes into the appropriate amino acid sequences and then drew the resulting organism.
Posted by Rebecca Perlin at 3:09 PM No comments:

This week the kids built periscopes. 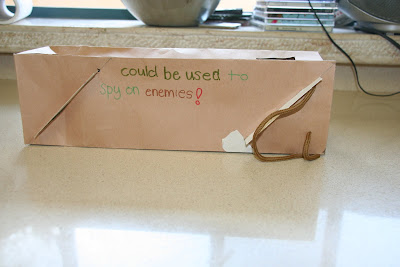 Posted by Rebecca Perlin at 2:55 PM No comments:

General Science: Chemistry in a bag

The kids started off with calcium chloride, sodium bicarbonate (see if your kids remember this compound's common name...it's baking soda), water, and phenol red, an indicator for acids. They put all of these materials in a plastic bag, the catch being that the liquids (water and phenol red) were first poured into plastic cups, which themselves were carefully placed in the bag. Why all the extra steps? This allowed us to measure the whole business BEFORE the chemical reactions began. After tying off the bag, the kids allowed the powders and liquids to mix, and that's when things got exciting! The kids observed many changes including: bubbles, the bag inflating, the red liquid turning yellow, and the contents both heating up and cooling down. The kids then measured the weight of the bag with its contents, and they were pretty surprised to find very little if any change. That's conservation of mass for ya! Step 2 of this experiment was breaking down the reaction into parts to see what happens when you combine different pairs of ingredients.

Posted by Rebecca Perlin at 8:00 AM No comments:

This week we started talking about DNA. The kids learned about its chemical structure, focusing on the 4 nucleotides and the rules for complementary base-pairing. Then we made models using clay.
Posted by Rebecca Perlin at 7:45 AM No comments: 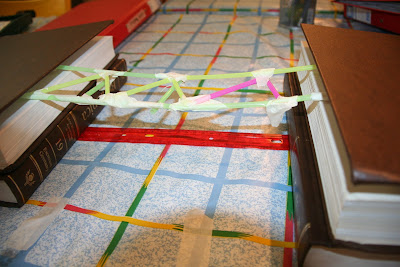 This week the kids built bridges out of straws. Given 20 straws and some tape, the kids were challenged to build a bridge spanning 25 cm that would hold the maximum weight.
Posted by Rebecca Perlin at 7:38 AM No comments: 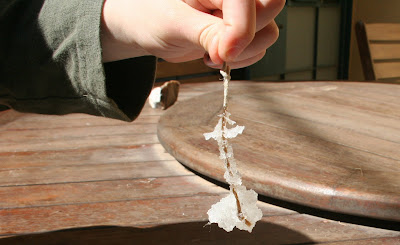 This week we continued our investigations of solutions by making and examining crystals under the microscope. First we made saturated solutions of salt, copper sulfate, and borax. Then we placed a drop of each on a microscope slide, put them outside and waited for them to evaporate, and then used a microscope to look at the crystals that remained.

Pretty cool, but not nearly as cool as the rock candy we prepared. On paper, a very simple operation: Make a really saturated solution of sugar water (3:1) ratio. Heat it on the stove. Then pour it into a jar that has a string suspended inside. Wait a week, and voilà, you've got rock candy. In practice though, it's very messy, sticky, with an extremely low yield. We observed that using a pipe cleaner will produce better crystals because of the increased surface area, but then you might also get brightly colored crystals that not so mysteriously match the color of the pipe-cleaner.
Posted by Rebecca Perlin at 4:22 PM No comments: 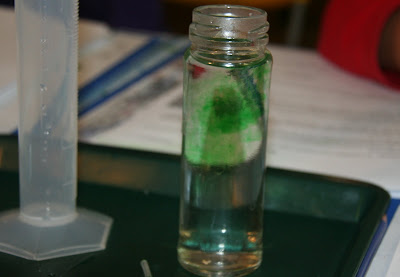 In the biology group we also noted that the final volume of the sugar solution was surprisingly LESS than the sum of the initial water volume plus the sugar. Part of what happens when you dissolve something is that it reacts chemically with the solvent (fancy-talk for liquid) and/or fits into the spaces within the molecules themselves.
Posted by Rebecca Perlin at 11:49 AM No comments:

This week the kids built bridges out of index cards. They could bend or cut the cards anyway they liked, but the bridges had to span 10 cm, with no more than 1 cm at either end resting on the supporting books (once again an incomplete set of 1985 Encyclopedia Britannica comes in handy).
We tested the bridges to see which ones could support the most weight. The simplest flat bridges could hold around 30 g, while bending the card into a fan-like structure could support more than a half a kilo. Pretty cool!
We concluded by discussing how bridges and other structures often feature triangles because of their ability to transmit forces of tension and compression.

Posted by Rebecca Perlin at 11:24 AM No comments:

Physics and Biology: How's your aim? 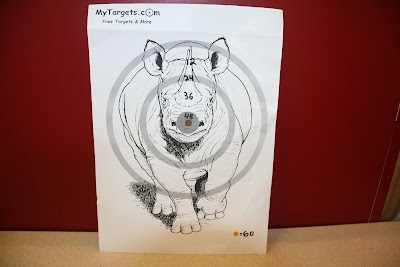 This week we carried out an experiment to test the effects of using one eye or two eyes on depth perception. The kids were given a picture of a target superimposed on a charging rhinocerus.* The target was placed at a distance of 35 cm from the subject, and then he or she had to "shoot" the target with a marker, meaning try to draw a dot at the bullseye. Using different colors for the 3 conditions: both eyes, right eye, and left eye, we were able to score the shots. It was surprisingly difficult to hit the bulls-eye using only one eye, and even when subjects were successful, the kids observed that they were using other cues to compensate, for example how far your arm needs to be extended.

Afterward we did a little comparative anatomy, looking at a skull belonging to a human(we used our own), a horse, a wild bore, and a dog. We observed that in order for depth perception to work, an animal's two eyes must have overlapping fields of vision. We also related these anatomical differences to whether or not animals tend to be predators or prey. Of course, as one student pointed out, this only works when you're talking about animals that use vision in the first place - i.e. doesn't work for bats who hunt using their keen sense of hearing.

*No rhinos were harmed in this experiment
Posted by Rebecca Perlin at 9:48 AM No comments:

This week we wrapped up our unit on acids and bases by testing which toothpaste works best. The bacteria in your mouth need food to live and multiply. When you eat sugary foods and other carbohydrates, the bacteria use them as food, too. Bacteria in your mouth turn the sugars in these foods into acids that can dissolve tooth enamel (the outer layer of the tooth). Brushing your teeth can help by getting rid of the sugar, but it also functions to reduce the acid-attack on your teeth.

Using chalk to represent teeth (chalk is made of calcium carbonate which is chemically similar to teeth), the kids tested each toothpaste as follows: They set up 4 test tubes, each one with some vinegar, a piece of chalk, and some dissolved toothpaste from one of the brands being tested. Immediately after combining these materials, a balloon was placed over the opening of each test tube. Without toothpaste protection, the balloon inflated as a result of the carbon dioxide produced by the acid-base reaction. Therefore we concluded that the toothpaste that resulted in the least-inflated balloon was the MOST effective.
Posted by Rebecca Perlin at 9:05 AM No comments:

This week we wrapped up our unit on acids and bases by comparing the strengths of three different brands of antacids: Tums, Gaviscon, and Rennie. We began by talking about the role hydrochloric acid plays in the stomach and how antacids treat indigestion by neutralizing this acid when it backs up up into your esophagus.
To test which brand works best the kids ground up each antacid pill into a fine powder, dissolved it in warm water, and then added it to a test tube of vinegar (our stand in for hydrochloric acid). After waiting a minute, they measured the pH. They concluded that the antacid that resulted in the pH closest to 7 was best at neutralizing the acid.

Along the way we noted several sources of error including not using pills of the same size, losing pieces of the pills as they were being ground up, and the water temperature being variable. We also made an exciting unexpected observation. Turns out that in addition to producing an acid-base reaction, adding Gaviscon solution to vinegar leaves you with an awesome slimy gel-like solid. For your average 4th grader that's up there with the inadvertent discovery of antibiotics.
Posted by Rebecca Perlin at 6:42 AM No comments: 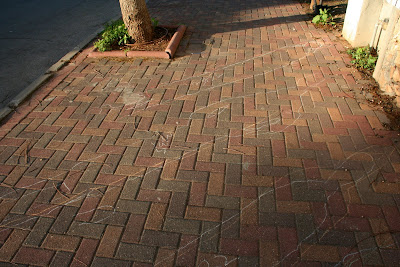 This week we observed what happens to outdoor shadows produced by the sun over time. The kids worked in pairs repeatedly tracing each other's shadows, however always from the same starting position. We were all pretty surprised to see that even over a short period of time, in the late afternoon our shadows grew and changed in position. 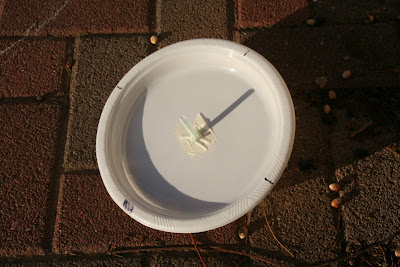 In physics we took this one step further and used what we learned to make sundials. We built them out of straws mounted on plates. The kids brought them home and set them up in spots that get a lot of sun, so that they will be able to trace the straw's shadow at different times over the course of the day.
Posted by Rebecca Perlin at 6:17 AM No comments: