What do bicycles, frisbees, yo-yos, hula hoops, dreidels, and even the earth have in common? They all spin, and so long as they spin the better they are at resisting what gravity is trying so hard to get them to do, which is tumble and fall. This week in physics, we played dreidel with a twist. Instead of playing dreidel for gelt, we played dreidel WITH gelt. The kids prepared 3 dreidels as follows: Each one had a plate with 4 coins attached either at the center or at the periphery in one of two possible patterns. The goal was to see which distribution of weight allowed the dreidel to spin the longest. Here's your clue: How is the weight distributed on a bicycle wheel? Is more of it at the center or along the periphery?
Posted by Rebecca Perlin at 11:53 AM No comments:

Biology: Why are cells so small? 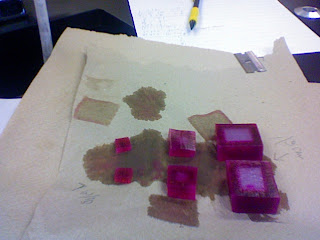 I've been getting some push back from the kids on all the tiny stuff we've been studying: microscopes, cells, chemistry, etc. So before we move on to bigger and better things, I thought we should at least address one last itsy bitsy, but not unimportant question: Why are cells so darn small? Even elephants, whales, and oak trees, big as they are, are made of of tiny cells, the same size as the unicellular organisms we found in drops of pond water.

To answer this question we looked at potatoes. The potatoes represented cells, and we submerged these potato cells in iodine, which stood for oxygen, food, waste or whatever stuff needed to be moved in or out of the cell. We cut up potatoes into 2 different-sized cubes: teeny tiny (c. 0.5 cm3) and large (c. 5 cm3). We placed these in a jar of iodine and waited. After about 20 minutes, we removed the potatoes, now black after reacting with the iodine, and sliced them in half. The idea was to see how far the iodine penetrated the potato (Picture shows similar experiment done with agar cubes absorbing phenolphthalein). In both teeny tiny and large potatoes the iodine moved less than a millimeter in. However, the big difference was when we considered what percentage of the potato had been exposed to the iodine.

We discussed how the surface area of cell is a limit on how much stuff can be moved in and out of a cell, while the volume of the cell determines the demand on imports (food, O2, etc) and exports (waste products). In large cells, there is simply too much volume for the surface area to handle, and the cell cannot move stuff in and out of the cell fast enough to meet the cell's needs.
Posted by Rebecca Perlin at 10:36 AM No comments: 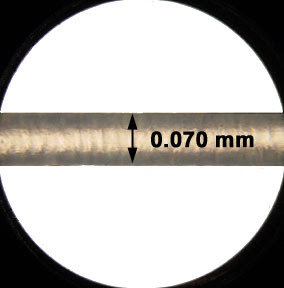 This week we learned a technique for measuring the length of tiny things. The kids measured a louse (for the uninitiated that's singular for lice), onion cells, and a human hair. This activity gave new meaning to the question: Do you have thick hair or thin hair?

So what unit do you use when you're measuring something so small? Meters, centimeters, millimeters? At this scale we're talkin' microns, 1000 of which make a millimeter. Using a ruler, the kids measured the field of view. Then they converted this number to microns. After examining a specimen, they estimated how many times it would fit within the field of view, did some simple math, and came up with a measurement that was within 2.5% of the accepted value. Not bad for a day's work!
Posted by Rebecca Perlin at 1:05 PM No comments:

Every building enterprise requires the architect to overcome the forces of gravity and wind to literally rise to the challenge of building something both tall and stable. In our case, the kids were challenged to build skyscrapers out of newspaper and tape. Through trial and error the kids figured out different effective building techniques (e.g. folding the paper into various shapes and building a wider/heavier base).

Afterward we evaluated each tower by measuring its weight, height, and stability in the face of a powerful blow dryer. One of the interesting things we noticed was that different designs privilege one characteristic at the expense of another, meaning it's really hard to build a tower that is both stable and tall.

Posted by Rebecca Perlin at 11:54 AM No comments: 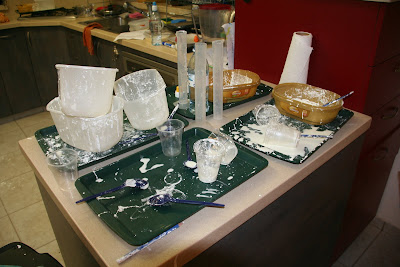 This week's challenge was to classify ooblek (roughly 2 parts cornstarch to one part water) as a solid, liquid, or gas. Pretty easy, right? Wrong! Ooblek belongs to an unusual class of liquids that become solid when subjected to sudden pressure or force. As it happens quicksand behaves remarkably similarly to ooblek, which comes in handy if you're an ooblek expert asked to consult on the best way to escape from quicksand. To thrash or not to thrash? The kids submerged action figures and plastic animals in the ooblek and compared the reults of rescuing them using quick movements versus slow movements. Their recommendation: Move slowly and don't panic. Thrashing around simply causes the ooblek (or quicksand) to solidify, making it even harder to get free. 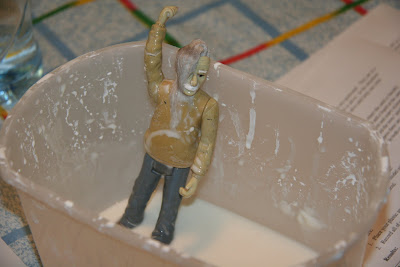 Posted by Rebecca Perlin at 11:49 AM No comments:

Biology: You must be this SMALL to go on this ride 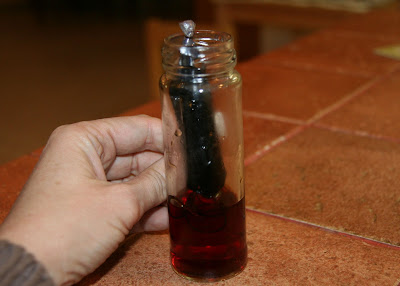 What does the cell membrane have in common with filters, sifters, and colanders? All of the above are SEMI-PERMEABLE, meaning some substances can pass through them, while others can't.

In this week's experiment we used dialysis tubing (thin layer of material that contains various sized holes) to model the cell membrane. We tied off the dialysis tubing with string to create a bag that we filled with corn starch solution and glucose solution. First we submerged the bag in a jar of water and tested the surrounding water for the presence of glucose using glucose strips. Then we replaced the water with iodine. We waited a few minutes to see if there was a color change in either the bag or the jar. Iodine turns black upon contact with starch, so a color change inside or outside the bag would demonstrate which molecules had traveled through the bag. Check out the picture, and see if you can guess which molecule, starch or iodine can travel through the bag. Hint: Bigger ISN'T better.
Posted by Rebecca Perlin at 11:38 AM No comments: