Physics: Whatever floats your boat 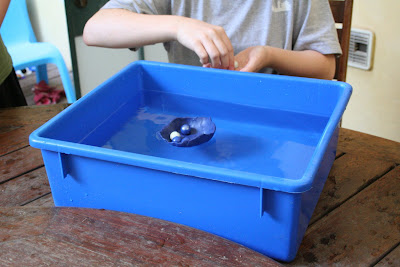 This week the kids were given 6 items to analyze. First I asked them to order them by weight. The twist was they had to do it first by guessing, and then by measuring the weights with a scale. The kids were pretty surprised by how wrong their guesses were. We wondered why it was that some things, like say, a large piece of styrofoam "feel" lighter than others when they actually weigh more. We got some clues when we moved on to part two of the lab: testing each item to see if it floats or sinks in water. Wouldn't you know it, the things the kids thought were light, were floaters, and the things they thought were heavy, were sinkers. However, contrary to our expectations, whether something sinks is NOT simply about weight.

Then each kid was given a lump of clay. After observing that it too was a sinker, they were challenged to build a boat out of said sinking clay, and not just that, but a boat that could carry cargo (any number of marbles, also sinkers). After some trial and error, the kids figured out which shapes worked best.

Then, just for fun, the kids made bouncy balls out of water balloons.
Posted by Rebecca Perlin at 11:01 PM