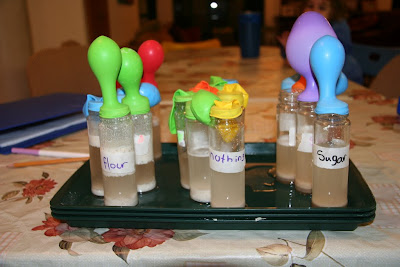 Following our discussions on cell transport, we spent some time this week on cellular respiration, that's fancy talk for the breakdown of food within a cell to release energy. This process produces carbon dioxide as a byproduct.

We focused on yeast, a single-celled fungus. Some of the yeast we fed flour, some sugar, and of course some unlucky yeast got nothing at all. To get an idea of which food was eaten most heartily by each sample of yeast, we covered each bottle with a balloon. Then we sat back and watched the show. The samples of yeast fed sugar were the happiest, i.e. the balloons were the most inflated because of the greater production of carbon dioxide. The flour came in second place, and not surprisingly, the yeast fed nothing did nothing.

We related this experiment to earlier discussions comparing the size of different carbohydrates. Flour is an example of a starch, and as such is LARGE and must be broken down first before entering the cell. That takes time. Sugar, on the other hand is smaller, and can be broken down more easily.

Next week we'll be making bread and butter, so send your kids with an appetite.
Posted by Rebecca Perlin at 8:36 AM