General Science: It's a gas! 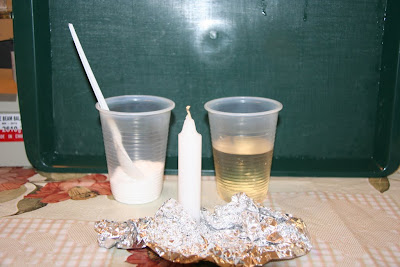 For our experiment this week, we did an oldie but a goodie...
what happens when you mix baking soda and vinegar?

This week we took it one step further to show that the combination of baking soda and vinegar produces a gas that can put out a fire. Passing a lit candle over baking soda had no effect on the flame. Same deal for the vinegar, but when you combine the two, and you get your EXPLOSION (i.e. bubbles), passing the candle over extinguishes the flame. Why does this happen? Mixing baking soda and vinegar is a chemical reaction, and as such, produces something new, carbon dioxide. That's what the bubbles are, and they have the property of putting out a fire and that's why they carbon dioxide in an actual fire extinguishers. Cool, huh!?
Posted by Rebecca Perlin at 12:50 PM