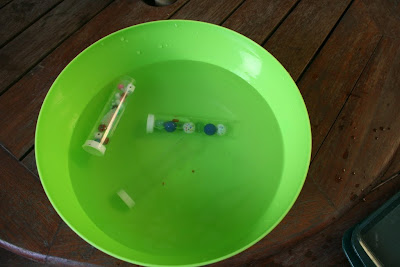 Today we continued our investigation of why things float. The kids were given various materials and a tub of water and were challenged to fill 3 canisters so that one floated, one sunk, and one was suspended. As you might imagine, sinkers and floaters were relatively easy to manage, but suspending a canister under water was a bit trickier.

Having already established last week that floating and sinking isn't JUST about weight, we considered a new concept, DENSITY, how much mass is stuffed into a particular space. The kids then measured each canister's mass and volume and then calculated whether its density was greater than, less than, or equal to 1 g/ml, the density of water. We concluded that objects with densities greater than water sunk, less than water floated, and equal to water were suspended.

We concluded by measuring the mass of a canister of oil. Taking into account the volume of the canister, the kids correctly predicted that it would float. Then we looked at some salad dressing I conveniently forgot to put away last night after dinner.
Posted by Rebecca Perlin at 9:15 PM