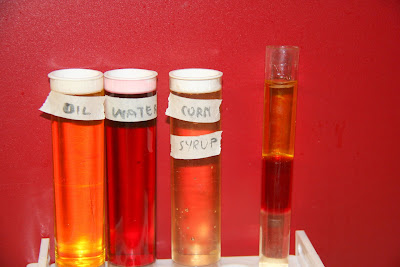 This week we began an investigation of why things float and sink. We looked at a couple different set-ups and made observations. The first thing we looked at were some raisins in a glass of seltzer. What was odd about the raisins was that sometimes they floated and sometimes they sunk. It took a while to figure out what was going on, but then we noticed that the raisins would initially sink, and then after collecting some bubbles from the soda, would take a ride to the top. The second set-up was a simple lava-lamp-like device. Some water, some oil, and then to literally spice things up, we added salt. Globs of oil that had been previously sitting on top of the water were dragged down by the sinking salt. As the salt separated from the oil, these globs would then race back to the top. Finally, the kids filled test tubes with 3 different liquids: water with food coloring, corn syrup, and oil. They observed the layers that formed and then tried adding them to the test tube in a different order to see if that made a difference.

Next week we'll discuss these observations more and try to understand what's going on.
Posted by Rebecca Perlin at 11:16 AM