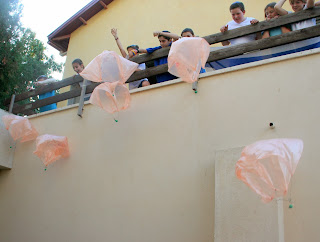 Why do some objects fall faster than others?

We reenacted Galileo's experiments in Pisa to test whether an object's weight influences its speed. After a quick trip up the Leaning Tower of Raanana (aka my stairs) like Galileo, we concluded that weight DOESN'T matter, and that how fast an objects falls is the result of an object's air resistance, i.e. the friction between the object and the air as it moves.

From there we naturally moved on to the subject of parachutes, objects specifically designed to maximize air resistance to keep jumpers from hitting the ground too fast. We dropped balls of modeling clay with and without home-made parachutes and compared flight times and the effects of hitting the ground on our jumpers.

As an extra bonus this week, we also caught the solar eclipse. Thanks to my husband, Danny for the heads up about the eclipse and for showing us how to safely project the image of the sun on to a white board using binoculars. Of course, you should NEVER look through a telescope or binoculars to point them at the sun. Doing so can result in partial or total blindness.
Posted by Rebecca Perlin at 9:58 PM