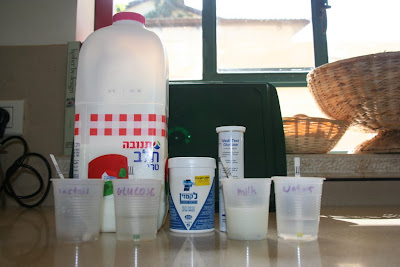 This week we did one of my favorite kinds of experiments, the kind that ties in pretty much everything we've been learning about all year: chemistry, enzymes, genetics, evolution...You name it, we've got it! We started out by testing the effects of adding lactaid to milk. Using glucose strips we showed that lactaid causes the lactose in milk to break down into simpler sugars such as glucose. Lactaid is a substitute for lactase, the enzyme that mammals use to break down milk.

So far, so good....but where's the drama?! After understanding a bit about the chemistry, we looked at milk digestion in the context of human evolution. No more simulations, no more flipping coins. Instead, we took a real-life example, and one that relates to our own species. In MOST humans, as is the case in most other mammals, babies STOP producing lactase around the time they are weaned. What this means for most mammals is that drinking milk post-infancy causes stomach problems. Yet among some humans - perhaps, you know one of these mutants?! - eating milk products throughout their life is done happily with no side effects.

What made these mutations persist in certain populations and not others? The strong correlation found between populations whose ancestors hung out with cows and sheep with populations with a high frequence of lactose TOLERANT individuals suggests that the distribution of this trait is the result of some serious natural selection. Having the ability to digest milk, particularly during cold winters when others food sources were scarce gave people with this mutation a real advantage, which they in turn passed down to their kids.

So if you're one of those people who use a pint of Ben and Jerry's to take the edge off a bad day, now you know why.
Posted by Rebecca Perlin at 9:21 AM